Thoughts on the last night of the year

2011 will be over in a few hours. In all of the obvious ways it has been a good year for our family. In spite of now having an hour commute to and from work, Mike's had a better work year than he's had in years. The company is doing well even in this abysmal economy, and Mike is beginning to see some of his hard work pay off. Jonathan and Madi, while growing up too fast, are growing into amazing young people, and make us prouder every day. Jake has had the best year of his life. He is much more agreeable than he's ever been. He still doesn't so much care what others think of him, but somehow he has transformed into a pleasant and mostly cooperative little guy. We suspect that starting the year out in a mainstage play was a turning point for him. Having his first lead role helped too. This week someone we didn't know actually recognized him in Publix for his role as Ugly in HONK! We've had a relatively healthy year as well. Mike's bloodsugar had some ups and downs (or should I say some ups that brought us down?), and we've dove into a lot of alternative therapies for Madi's thyroid, but at last check it is going in the right direction. So all in all a good year right? Well, that could be debatable. You see, we don't live in a bubble. Our close knit "family" of friends has been rocked to the core this year. In many ways this topic is not mine to blog about so I will be sure to avoid any names or details. Just as when things were good, it was hard to begin to explain how close our friendship community was, now that things are bad it is even harder. These are the people who put away our Christmas decorations when we were out of town for three weeks, the friends who supported me through Mike's illness four years ago, people who have helped to raise each others children, MY children! They are the "village", MY village! The "new normal" that we are now living is very much like a divorce. A divorce that has left some of us feeling like forlorn children. Don't get me wrong, there are victims in this tragedy and I'm not naive or whiney enough to be calling myself one of them, but it seemed like the time to blog about this because for the rest of my life the last quarter of 2011 will bear a stain. It is the kind of event that warrants a "before that" and "after that" kind of thinking. Let me tell you, life was much easier in the "before" days. I've learned a lot in the last few months. I appreciate my family and my faith more than ever. I've had a front row seat as I've watched God carry people I love through incomprehensible situations. Someday the new normal will just be normal, faith will continue to carry everyone through. I know in my heart that God is a part of this community however torn apart it seems. In the meantime, I will do my best to muddle through this unscripted scene that is life at it's messiest. I will pray that the Holy Spirit continues to guide me as I continue to guide my own children through this uncharted territory. And someday I'll stop wishing for those "before" days.
Posted by Julie at 6:46 PM 4 comments:

I haven't posted again since Christmas night because

1. I still haven't figured out why I can't seem to flip pictures

and 2. I'm just having too much fun exploring a real working computer! 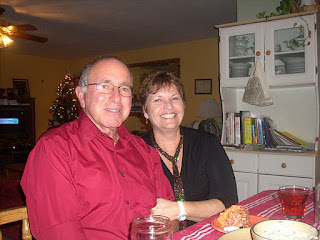 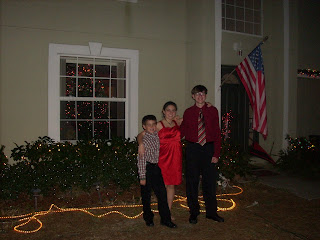 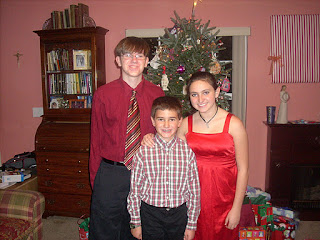 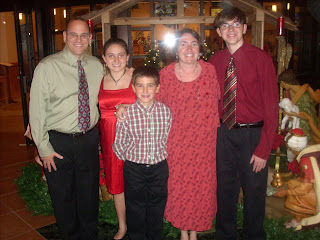 I've flipped this tree picture a few times, but it keeps coming up sideways. I will experiment more with this computer tomorrow. Also the pics I have of the boys from this morning are sideways too. It's a work in progress! 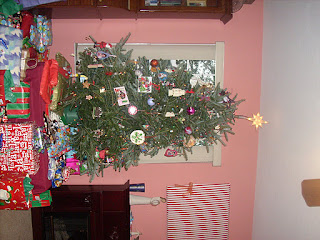 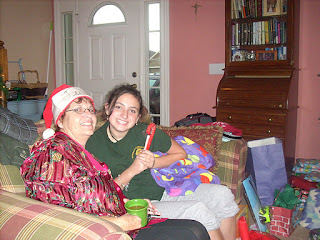 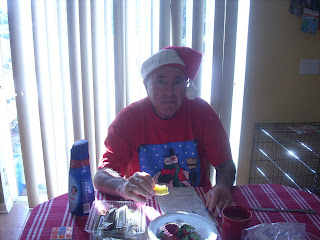 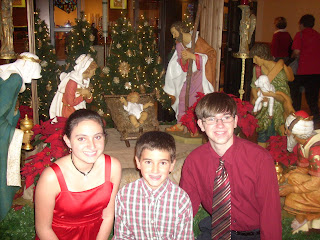 To my loyal few (readers)... I got a laptop for Christmas!!! Prepare yourself for lots of posts!
Posted by Julie at 11:14 AM 4 comments:

I got on the computer awhile ago to update (for the first time in over a month!!) and between the slowness of the computer and my desire to search two different counties worth of libraries and read blogs and homeschool forum posts from people I know and don't know, now I have exactly 18 minutes to type before I have to drag Jake away from the neighbors and get in the car. Jake and Madi have choir at 6:00. Why is it that I have to be in the car at 4:00 when church is only 15 minutes away?! Because I have to drive to Downtown Disney to pick Madi up from a really cool birthday party at Disney Quest. Am I insane or Mom of the Year? Actually Mom of the Year probably goes to the mother of the host of the Disney Quest Birthday party. That means I'm probably insane. There was no way I was going to have Madi miss this party for a very good theatre friend (who is very much like a younger though taller brother to her) and there is no way she can miss choir tonight since Christmas Eve the mother of all choir nights is only FIVE days away so what's an insane mom to do but accomodate her daughter by spending two hours in the car. Jake and I have a new Andrew Clements book to listen to on the ride. Jonathan is at the party too, but he gets to stay down there for dinner and will get a ride home since he is not in choir. Interestingly enough one of the options for today was for Jake and I to head down there earlier and spend some time at Downtown Disney, but he chose to stay and play with the neighbors instead (and I chose to wrap Christmas presents and fight with this slow and annoying computer). I'm down to 8 minutes now. When I return hopefully in the next day or two I have all kinds of updates. Since I last posted we've celebrated Thanksgiving and our 17th anniversary, we just finished a weekend of six shows (two of Best Christmas Pageant Ever and four of Bugsy Malone), Jonathan has finished a semester of Spanish 2 and should finish English this week, we have booked a cruise for the end of January beginning of Feb, we've had all kinds of nice pictures taken that need to get on here, the kids performed at around 10 different Christmas tour events, and probably a lot more stuff that I can't even think of right now.
Posted by Julie at 12:36 PM 3 comments:

Julie
I'm Julie, wife to Mike, mother to Jonathan (18), Madi (15), and Jake (11). We are a Catholic, homeschooling family, although Jake is attending public school this year. We currently have a Chinese exchange student living with us, "Mary". I have a wheat mill and like to bake our own bread, but we eat far too much junk food to balance it out. We love reading aloud and sharing deep discussions in our family especially about our Catholic faith. On the other hand, we can quote every episode of Seinfeld, Friends, and Big Bang Theory. I've been blogging haphazardly since 2007.