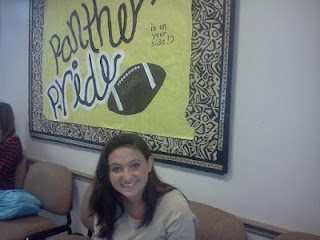 ...in no particular order with no descriptions. 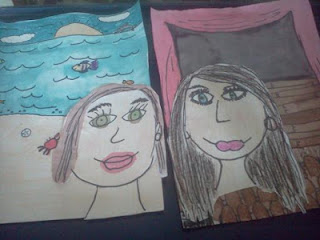 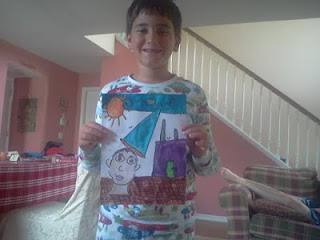 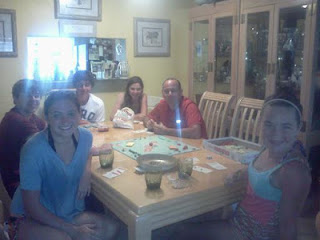 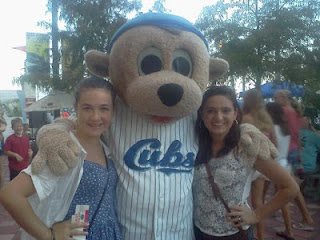 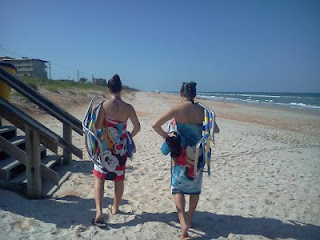 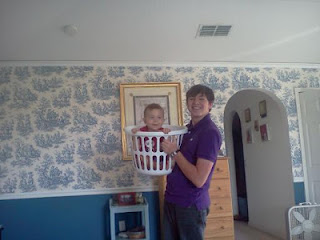 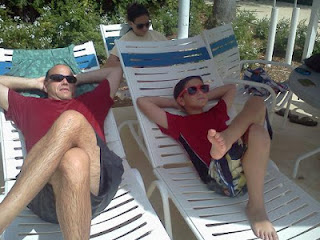 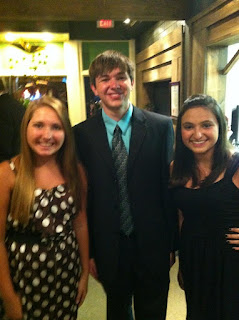 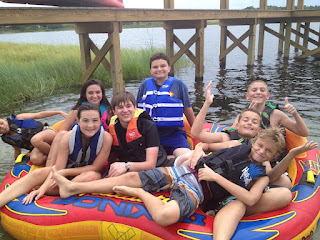 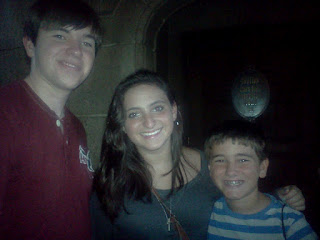 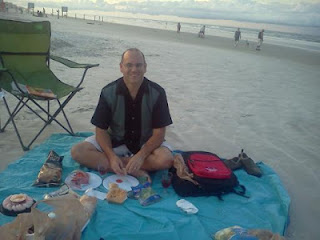 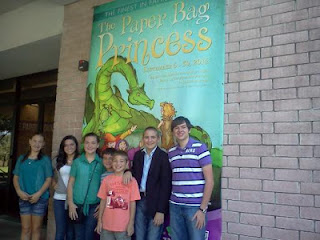 I'm going to type what ever comes to mind for the next 10 minutes, then I'm walking away from the computer. I just realized that last Wednesday was the day I did the every hour post because I was thinking today might've made a good every hour picture post, and it was completely different from last Wednesday. For one thing Jonathan got a mole removed from his head this morning. As the doctor was carving Jonathan's head, I was thinking "maybe I should take a picture of this for my blog or facebook" (but I didn't). Then we had our first mother-daughter bookclub meeting of the season. This is our 6th year of doing this and Madi and I have never missed a meeting. I was looking at how much the girls have grown up and I wondered if I even have a bookclub picture of every year. Again I thought about taking a picture for posterity and didn't. I of course had to mention that bookclub began five years ago and how vastly different our lives will be five years from now...very depressing!!! Jake had "the best day of his life today", Tiffany took him and her kids to see The Avengers. She completely made his day!! Tiffany probably even has a picture of this. Can you believe I only have 2 minutes left? The kids are back on a Monopoly kick, this seems to be a September thing. Speaking of September, we have a pumkin spice candle burning in our house right now...yum!! The other day when I checked out books from the libary my due date was October 1st and that made me smile. I love October. The funny thing is, I told Mike recently two of the hardest months of my life have been Octobers, but I love it anyway. The lovebugs are plentiful, there are yellow butterflies everywhere and the raintrees are blooming...you have to look carefully for signs of fall in Florida, but it's there! It's here! Time's up!
Posted by Julie at 2:36 PM 2 comments:

I haven't read any of these posts yet, but I'm saving them here so I remember. We've become much more "traditional" in the high school years, but I think a lot of these are more "less traditional".
Posted by Julie at 4:19 AM 3 comments:

I'm pretty good about copying fun ideas, so I'm following Tiffany's lead and posting a picture from every hour of my day. 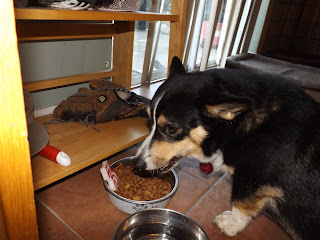 Today is Mickey's third birthday. Jake and I decided to put a candle in his food bowl and take a picture even before I decided to take pictures of every hour of our day. (this was just before 8:00) In case you were wondering, we didn't light the candle. Besides Mickey's birthday, today is also the 71st Anniversary of my grandparents' (Mugga and Papa) wedding. I wish I could take a picture of them!

At just before 9:00 I was returning from picking Madi up from her class and delivering a homemade loaf of bread to a friend who has five little kids, and we found this on our house. 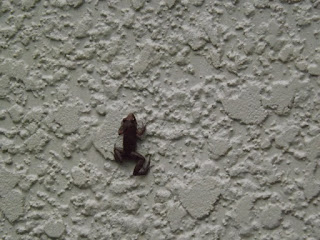 
Speaking of homemade bread and little kids, this little guy helped me make the bread yesterday. He purposely chose not to smile for the picture. 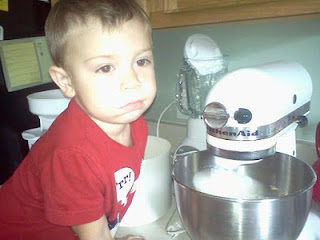 10:00 found me reading to all three kids, we ended up finishing this book today and it is very exciting, though you can't tell that from their lazy positions. 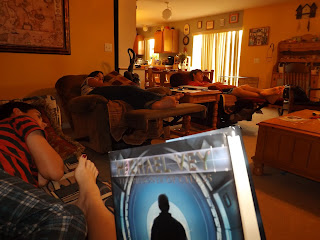 At 11:00 I was trying to order checks (yes we are old fashioned, we still use checks), but they were way too expensive so I ended the phone call with frustration and no checks in the mail, not to mention a trip to the bank on my to do list. I was also returning some texts at the same time. 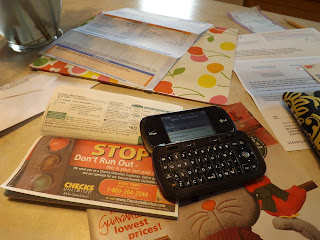 Mike is going to be away tonight and Jonathan and Madi both have places to be so we had a bigger lunch and we'll have a more lunch-y supper, so 12:00 found me making burgers and reading a really funny story that Madi and a partner had to write for their English class. It was about Freakish Julio Fillipe, his desire to be independent and leave the circus, and his sister Julia who had a third arm coming out of her back. In the end Julio and Julia are united in their love of bacon cheeseburgers and leave the circus ("circus shmircus," they say) to work at Burger King. 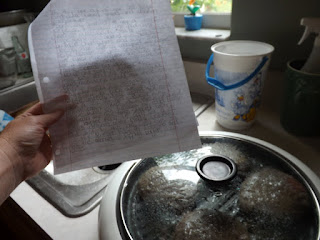 It is just a happy coincidence that the story is about burgers and we were having burgers.

At 1:00 I was reviewinng History with Jonathan then he took a quiz. 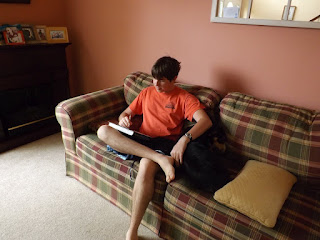 By 2:00 I was in my room uploading some of this draft so I can just publish the rest tonight. 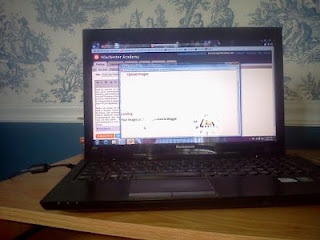 3:00 I was helping Madi with science. 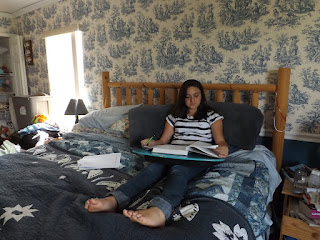 These kids do an awful lot of reclining don't you think?

At 4:00 I was reclining with this little snuggly guy. 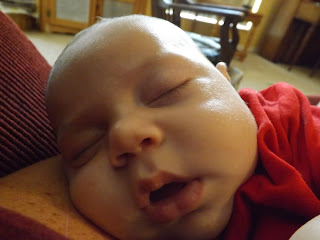 At 5:00 we had to pick of a friend of Madi's from the middle school so we loaded these cuties into the car. 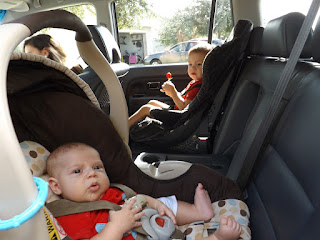 By 6:00 I realized I could get a free photo book from shutterfly, so I frantically started uploading photos. 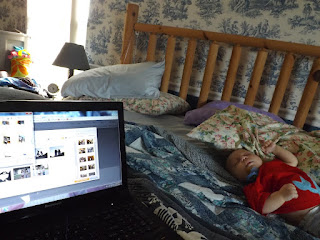 Around this time, I yelled for the kids to eat something (see what I mean about a lunch-y supper?), then stage manager Jonathan got picked up for his rehearsal, I had to take Madi to her high school religion class, which meant Jake and the two little visitors too. Jake and Landon played on the playground while I fed Dawson, then we met their Mommy so they could go home. Then there was nothing for me and Jake to do but... 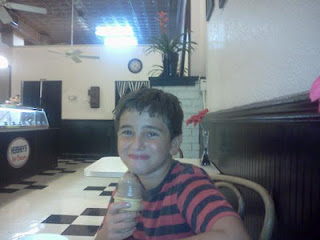 Then it was time to go pick Madi up, I chatted with my newly moved back to town friend, Pam, her kids came out, Madi came out, we headed home and it was 8:00. 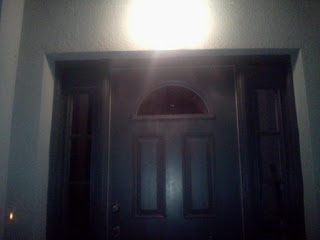 Well my day started before the Mickey picture and it's not completely over yet, but there it is!

Tiffany and Cindy both did a daybook yesterday and the peer pressure got to me!

On My Mind....so much to do, but getting up early is taking a toll on me and I won't be doing any of it tonight!

Outside My window...it is dark, but Jonathan is at a rehearsal for a show he is stage managing and won't be home for hours. Thankfully he is riding home with a trustworthy adult so I can fall asleep anyway.

What We're Reading...I'm reading Homecoming by Cynthia Voight. Interestingly enouh I just finished Come Home by Lisa Scotoline, but they have nothing to do with each other. Jake and I are reading Little Town on the Prairie. All three kids and I are reading Michael Vey the Prisoner of Cell 25 (I read it already). Jonathan is reading/ listening to The Scarlet Letter for both English and History. He's also already done The Great Gatsby and the Cruicible for English. Madi is reading To Kill a Mockingbird (again) with her English class and teen trash (Pretty Little Liars series) for pleasure.

What we're Listening to...I've finally gotten Mike hooked on audiobooks for his commute, he just started The Hunger Games. The kids and I listened to The Watsons go to Birmingham 1963 last week. It is Madi's first bookclub book of the year. Before that I had the kids listen to The Walk by Richard Paul Evans (he also wrote Michael Vey), now we have Miles to Go to start. (I've read all three and am eager for the 4th, but I don't think it comes out until April), Mike listened to all three recently.

What We're Watching...We're trying to control our Seinfeld addiction, I'd especially prefer that we don't keep turning it on during lunch, but Jake's concern was that he might starve if he can't have lunch with Jerry. I love The Big Bang Theory before bed, but Mike prefers the news (which is a terrible thing to fall asleep to!!)

From the kitchen...we had the yummiest meal tonight... boneless pork loin ribs in the crock pot, corn on the cob, watermelon, and crescent rolls!

Around the House...too much mess!!

Praying for... health for a lot of nice people.

Julie
I'm Julie, wife to Mike, mother to Jonathan (18), Madi (15), and Jake (11). We are a Catholic, homeschooling family, although Jake is attending public school this year. We currently have a Chinese exchange student living with us, "Mary". I have a wheat mill and like to bake our own bread, but we eat far too much junk food to balance it out. We love reading aloud and sharing deep discussions in our family especially about our Catholic faith. On the other hand, we can quote every episode of Seinfeld, Friends, and Big Bang Theory. I've been blogging haphazardly since 2007.